Holy cow, World Cup Soccer is insane right now! I don’t even watch soccer on a regular basis, nor do I really understand a lot about it. Of course I played soccer when I was seven. Who didn’t play soccer when they were seven? That doesn’t mean I understand it. What I do understand is that when it comes to sports, people (including myself) get really intense about their team, whoever it may be. When the team is the entire United States of America, however, the intensity multiplies by 472 trillion. That’s the number. It’s science. So, where might you be able to experience some of this World Cup Soccer madness if you’re in Louisville? If you like an exciting, energetic atmosphere, try one of these three:

The Monkey Wrench on Barret Ave not only revamped their menu recently, but they have a ton of space and even more tvs. You could hear the number of people in attendance as you drove around the corner of Barret Ave during Sunday’s USA game. The place was jamming! They still have a delicious beer list and a full bar, and when World Cup Soccer is on, the entire place is loud and energetic.

I didn’t experience it personally, but I saw enough videos and heard from enough of my friends that Saints was the USA World Cup Soccer headquarters during both of the USA games. The roars from the scores came through the brick walls and poured into the streets of St Matthews as the game went on. Upstairs, downstairs, everyone was cheering on their country, and will be again this Thursday morning (6/26). 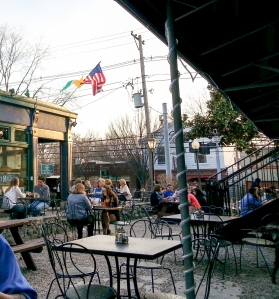 For as long as I can remember, Molly Malone’s Irish Pub has been the spot for all types of soccer watching. People come from all over Louisville to watch all sorts of soccer games at Molly’s, not just World Cup action. But seeing as how I live behind Molly Malone’s in the Highlands, I can definitely tell you about how loud the second half of Sunday’s game was. We went back home for the second half, but it still seemed as if we were there because we could hear the roars from our couch.

Of course, you could just watch the game from your couch, but where’s the spirit in that? Why not go enjoy USA World Cup Soccer with a few hundred of your favorite nut jobs at one these awesome Louisville joints!

Thinking of moving to Louisville or relocating within Louisville? I would love to speak with you about your next home – justin@metrolouisvillemls.net – 502.509.9278