Given our country’s current situation with the approach of an election year, we are surrounded by political ads and social media arguments about which presidential candidate will jack this country up less than the other. Would I vote for a burger and craft beer restaurant if it ran for President of the United States? Maybe. After all, their platform would be delicious food, great beer, and quality service…what’s not to like? No, I haven’t been influenced by a crazy lobbyist. My vote comes as a result of firsthand information and exploration. Recently, I was taken on a “tour” through the amazing flavors that Stout Burgers & Beers offers. It was awesome, and I want to tell you about it. 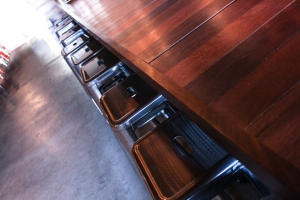 I brought a couple of friends with me, and we sat at the bar. Neil introduced himself and he asked the question, “Did you have a plan today or would you like me to take you on a journey?” Who doesn’t like a journey? I’m in. By the way, “Neil” is Neil Kustanbauter, the general manager of Stout Burgers & Beers in the Highlands, and a master of navigating his way through food and beer pairings. He suggested a pretzel for an appetizer and proceeded to pour our first draft sample, Rhinegeist Puma Pils. If you don’t know about Rhinegeist out of Cincinnati, then you will definitely want to check them out. They make some incredibly flavorful brews, and this Puma Pilsner was no exception to that. This is a nice, bright, hoppy pilsner that has a clean finish. A perfect starter to the afternoon, and it went really well with the lemon basil aioli we used for pretzel dipping.

Next up, we ordered burgers and Neil poured us a mild, dry hopped Saison called Apex Predator by Off Color Brewing in Chicago. Until this day, I knew nothing about Off Color Brewing. Now I know that they make a solid brew. This farmhouse style Saison is packed with flavor and, for us, it served as a nice bridge to the next path in our flavor adventure.

As three different burgers arrived at the bar, Neil guided us to begin with the Low and Slow, Stout’s signature chicken burger. I have to be honest here. When Neil suggested that one of our burgers should be the chicken burger I was a bit skeptical. I’m thinking, “I can get a chicken sandwich anywhere”. Um, I was wrong. First off, this isn’t a chicken sandwich, it’s a chicken burger. This is house ground, organic chicken in a patty, presented just like a regular burger. But, this is the best chicken anything that I have ever eaten. Stout BBQ sauce, fire roasted green chiles, cole slaw, cheddar, and crispy fried onions. Holy smokes, this thing is fantastic. Paired with a West Sixth Heller Heaven double IPA, the flavors just explode on your tongue.

Next, we dove into the Six Weeker. This burger has Stout’s signature house blend beef patty, brie, fig jam, arugula, and caramelized onions. First, let me say that I love brie. If brie is used incorrectly, it will kill everything it touches. Arugula is somewhat touch and go for me. It’s a fairly bitter green, and can also be used incorrectly. All of the items on this burger played very nicely together. I can’t tell you how complete and balanced this beast is. The Six Weeker paired flawlessly with the Dubuisson Cuvee des Trolls Belgian Pale. This is another beer that I had never encountered before.

Closing out the burger parade during our visit was the Stout Burger, obviously their flagship. When you taste this baby, you’ll know why they named the restaurant Stout. Bleu cheese, Emi Gruyere, rosemary bacon, roasted tomato, caramelized onions and horseradish cream. Wow. Just wow. I can’t even begin to explain how something with both bleu cheese AND horseradish cream is not completely overpowered by those two flavors, however this burger is the picture of balance. You can taste the beef, and that roasted tomato is like a cherry on top. Even though he probably wouldn’t always pair this burger with the North Coast Old Rasputin, Neil knew that we all love that beer and he tried it anyway. The results were fabulous. I couldn’t have asked for a better experience.

We were happy to be forced into ordering dessert. That bread pudding is something special. We had the Anderson Valley Rye Barrel Oatmeal Stout to wash down the bread pudding, which made it that much more special. Anderson Valley is a solid, long standing brewery out of Northern California that produces some great brews, including some of my favorite dark beers of all time. I am very happy that Stout Burgers and Beers chose to make the journey from LA to the Highlands of Louisville, KY. In fact, the local partner, Kathy Hinkebein, was instrumental in the Stout expansion into Louisville. Stout is not a chain. They only have three other stores, all of which are located in the Los Angeles area. So, thank Kathy next time you see her!

Look, I know I’ve said it before, but I have to say it again. This place is delicious in a lot of ways. Would they make a good President of the United States? I think so.

Thinking about moving to Louisville or relocating within Louisville? I would love to speak with you about your next home – justin@metrolouisvillemls.net – 502.509.9278

You can View ALL Louisville Homes for Sale at metrolouisvillemls.net

View homes for sale on the go with my mobile app!