As a local Louisvillian, what comes to mind when you hear someone say “4th Street Live”? Do you cringe and throw up a little bit in your mouth, or do you get excited for the weekend? The reason I ask is because 4th Street Live in downtown Louisville is not necessarily a place where you will find me…ever. Nor is it a place where you will find anyone I know who lives in Louisville. While it’s true that there is a crowd of people, local and otherwise, who attend 4th Street Live for something to do or somewhere to eat, it’s not a place that embodies the Louisville, weird, local community of awesomeness that makes this city so cool. One reason for this is that 4th Street Live is owned by Cordish Companies, which is based in Maryland. Their main focus is real estate development, entertainment, and gaming, which all subscribes to a touristy theme and is never “local” to anywhere, not even in their home state of Maryland. So it comes as no surprise to me that celebrity chef, Guy Fieri made an announcement recently that he will be opening one of his restaurants right here in Louisville’s 4th Street Live. In reviewing the numerous articles written on the subject, one might get the feeling that everyone hates Guy Fieri, and that Louisville will somehow burn down and and sink into the Ohio River if he opens a restaurant here. I’m here to tell you why it’s actually not a bad thing. 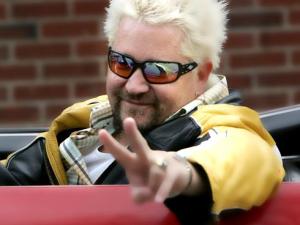 First things first. I’m not a fan of Guy Fieri. I’m not a fan of his Food Network shows, and to me, his style of cooking lacks creativity, among other things. Decadent food, when created by top celebrity chefs, or really any chef (celebrity or not) that is worthy of their title, is creatively delicious, niche oriented, and typically not something you would find on the menu at Applebee’s. When you peruse his menus looking to determine Guy Fieri’s niche food, he’s really all over the board. This leads me to my first point: Guy’s niche isn’t food, it’s entertainment and tourism. Entertainment as a restaurant? Yes. Do you think people eat at Dick’s Last Resort or Ed Debevic’s because the food is great? Not even close. It’s entertainment. It’s touristy. Yes, I think Guy’s menus are very reminiscent of Applebee’s and Chili’s, so let’s think for a minute about those large chain restaurants…

WHO IS THIS GUY?

So what’s Guy Fieri’s business model? Great question. If you look at the bulk of his restaurants, they are located inside casinos and aboard cruise ships. Do you see the entertainment theme carrying over? I do. Guy Fieri is a business owner. He has developed a brand using quirks and quips instead of flavors and fare. In 2012 he opened “Guy’s American Kitchen & Bar” in none other than New York City’s Times Square. Seriously, if you had to think of the most touristy location in this country, would Times Square not come to mind? After he opened in NYC, there was a review. It was quite possibly one of the most brutal restaurant reviews in the history of restaurant reviews. But guess what… That same restaurant is still in business 4 years later. Why? Because it’s where tourists can go and be a part of New York City (even though Guy is from California). It’s right in the middle of Times Square. It’s for entertainment. We have already established that his food isn’t great. Why would you pay $17 for a mediocre chicken sandwich? Because it’s in the middle of Times Square. The people that visit all the tourist traps in the world are there because they want to say that the’ve been there. They want to tell the story. They’re not all foodies. Their palates may not be that of a fourth level Master Sommelier. They aren’t handing out James Beard Awards. They are tourists. And they pay money for touristy stuff.

This brings me to my final point: Louisville has tourists, and the fact that someone who is drawn to tourism decided to put a restaurant here instead of anywhere else in the United States says something about our city. This is something that a lot of Louisville residents might not recognize because we go to work, we come home, we go to dinner at our favorite restaurants, we see our friends, we see our family, but we often overlook the amount of tourism going on in our home city. The main reason that the Kentucky International Convention Center downtown is currently undergoing major renovations is because we, as a city, need more convention space. We need updated, technologically sound convention space because larger and more widely known convention events want to use Louisville as host. The KFC Yum! Center brings all different sorts of crowds to the area. We have strong museums, we have national music festivals, and most of all, we have bourbon. Bourbon is a hot topic these days, and people are coming in droves to check out the hype.

I’ve said all of this to basically say that our city is growing. It’s drawing national attention from different arenas across the globe, and it’s helping us move forward. It’s not changing our foundation, but adding to our diversity. Guy Fieri picked Louisville for his next spot after opening a restaurant in Times Square. Wouldn’t you say he will fit right in at 4th Street? That’s where he belongs. Not in the Highlands, not in St Matthews, but right in the center of the Cordish circus . So, you can rest easy and continue to rock the “Keep Louisville Weird” bumper sticker on the back of your ’92 Volvo 240. You can keep supporting your faves by wearing your “I know where Highland Coffee is” t-shirt. Guy Fieri won’t destroy the awesome vibe we have here. You most likely won’t even notice when his restaurant opens. Because, until Cordish sells 4th Street Live to a local developer who then installs restaurants from Fernando Martinez, Dean Corbett, Anthony Lamas, Tavis Rockwell, and Eric Morris, I won’t be visiting. Louisville is weird and awesome, and it will stay that way even as it grows up.

Thinking about moving to Louisville or relocating within Louisville? I would love to speak with you about your next home – justin@metrolouisvillemls.net – 502.509.9278

You can view all Louisville homes for sale at www.louisvillehomeplace.com